36 Hours Down Under - A Preview of Sydney

After a two-week wait I received an email from the Australian embassy with my visa grant. Unlike my other visa applications, in particular for the US and Europe, getting an Australian visa was the easiest and most hassle-free application I have ever experienced. Everything was done online from filling out the application form, paying the visa to scanning all my supporting documents. I never had to leave the house. Easy peasy!

Now all I have to do is wait for the Big K's roster and hope he'll get a flight to Sydney.

Roster's out! Well, what do you know? Not only does the Big K get one but he gets scheduled for two flights down under. I decided to ride shot gun on his second flight where he gets a two-night layover. Time to pack my bags!

On the day of my departure, I was excitedly waiting for our ride to the airport when the Big K receives a phone call from flight dispatch. Uh-oh! I hear the words "planned delay". Oh no! Every air travelers' bane - delayed flights. Short as my visit was, the delay will make it even shorter! Oh well, nothing I could do about it now.


Finally, touch down Sydney! After dropping off our bags at the hotel and a quick late lunch at the food court at the nearby mall for the Big K's lemon chicken fix, we were off to Circular Quay.


Circular Quay is the founding site of Sydney and Australia. It is here where the first ships from Great Britain landed to set up a penal colony that later became the first European settlement in Australia.

Originally known as Semi-Circular Quay because of the actual shape of the harbour, it was shortened to Circular Quay for convenience. It is a major transport hub serving as the main terminus for Sydney's earlier trams (1861-1961) later replaced by bus and light rail lines. It is also the main pier for commuter ferries not to mention huge cruise ships.

Some of the tourist attractions located in and around Circular Quay are the Sydney Opera House, Royal Botanic Garden, Museum of Contemporary Art, Harbour Bridge and The Rocks.

A Hole in the Wall Burger Joint

Always mentioned in the top ten best burgers list in Sydney, the Big K and I just had to try Mary's burgers. So for dinner we and a couple of friends trooped off to Newtown in search of this much talked about burger joint.

We woke up to a bright, beautiful, sunny day. It was the perfect day to take in more of the sights the city has to offer. First stop, Hyde Park. The oldest parkland in Australia, Hyde Park was named after the original Hyde Park in London.

It was nearing noon and our tummies were starting to grumble. So where's the perfect place to have lunch on a beautiful, sunny day?

Where else but the beach! After a 30-minute ferry ride from Circular Quay, we arrived at Manly, a beach-side suburb of Sydney. According to history, Manly got its name from Capt. Arthur Phillip (first governor of  New South Wales and founder of the settlement that became Sydney) when he described the indigenous people living there stating "their confidence and manly behaviour made me give the name Manly Cove to this place". 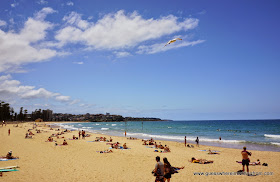 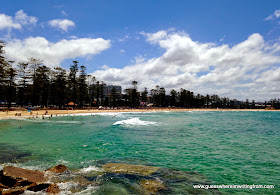 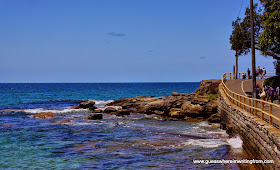 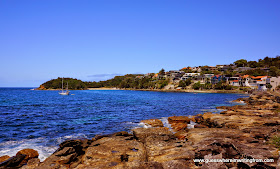 It was a short but sweet visit to Sydney. I can't wait to go back! In the meantime, my aching feet needs some attention. Excuse me but I'm gonna get me some nice long foot massage.....


More photos of our Sydney adventure in our Facebook page.