On the Road to Mandalay! (Myanmar, Part 1)

When I was planning our anniversary trip last month we were all set to do a temple run à la Angelina Jolie's Lara Croft in Siem Reap, Cambodia and stuffing our faces silly with yummy Vietnamese food on a back of the bike foodie tour in Saigon. But then I came across a picture of a hot air balloon gently floating across a vast plain dotted with temples as far as the eye can see. It was an early morning scene with mists still blanketing the surrounding countryside. WOW! Talk about taking your breath away.

Change of plans! We're going farther north into a country famous for its thousands of temples, a nation just starting to open up to visitors and the home of Nobel Peace Prize awardee Aung San Suu Kyi. The land of the golden pagodas, MYANMAR.

One of the first words I learned while planning (or should I say cramming) our Myanmar trip is the Burmese greeting of Mingalar Bar or Mingalabar. It rolls off your tongue quite nicely and I love how melodious it sounds. Literally it means "Auspiciousness with you". Or simply hello. The greeting is a guaranteed smile-generator as even the dourest-looking local or the little kid hiding behind his mother's longyi (the sarong-like traditional Myanmar garment) would burst into a smile and return the greeting.

The Big K and I had a week-long visit in Myanmar, specifically in Mandalay and Bagan. There are no direct flights from Manila to Myanmar so we took a flight via Bangkok on Bangkok Airways to Mandalay, one of three international airports in Myanmar. The other two are in Yangon (the former capital) and Nay Pyi Taw (Myanmar's current capital). 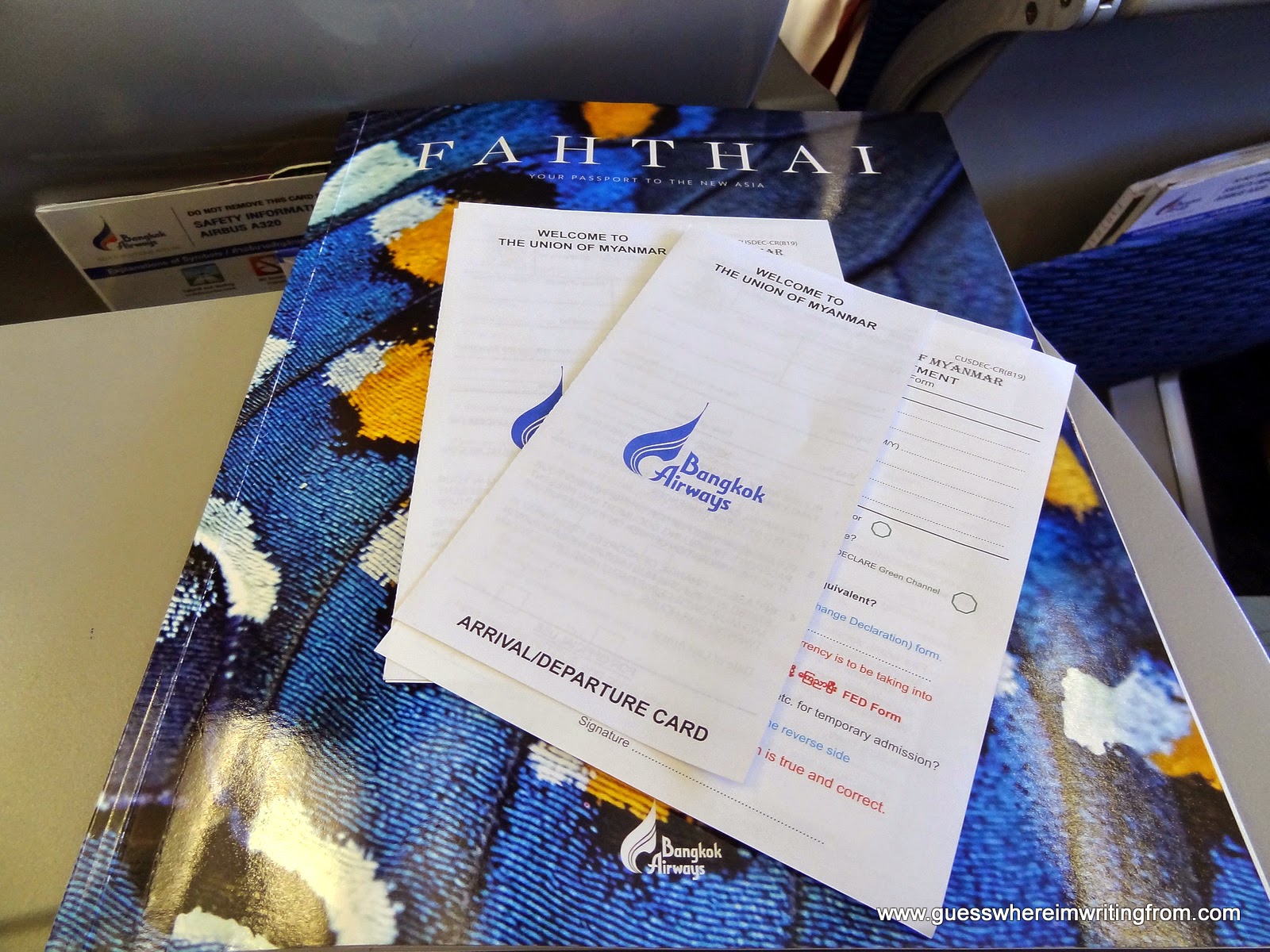 Excerpt from Rudyard Kipling's poem, Mandalay, that famously portrayed the exotic city of Mandalay filled with mystery that one can only expect to find in the Orient.

Mandalay is the second largest city in Myanmar (Yangon being the largest) and considered as the center of Burmese culture. It is the best jump off point for tours of upper Burma and the famous temple-dotted plains of Bagan (which was our main destination) .

The Big K and I spent two days in Mandalay, it was a bit short to see all the attractions it had to offer but with the help of a tour guide (with the sights spread far and wide and with limited time we had to get the services of a travel agency this time) we were able to see some of the popular must-sees.


Around Mandalay (Amarapura and Inwa)

The former royal capital of Myanmar in the 1700s, Amarapura is known for its traditional silk and cotton weaving. The Big K and I were so fascinated with the painstakingly intricate weaving demo we had to get ourselves some of their fabrics. I'm not ashamed to admit it but the Big K and I always get suckered by good quality merchandise. Hey! We're not complaining! 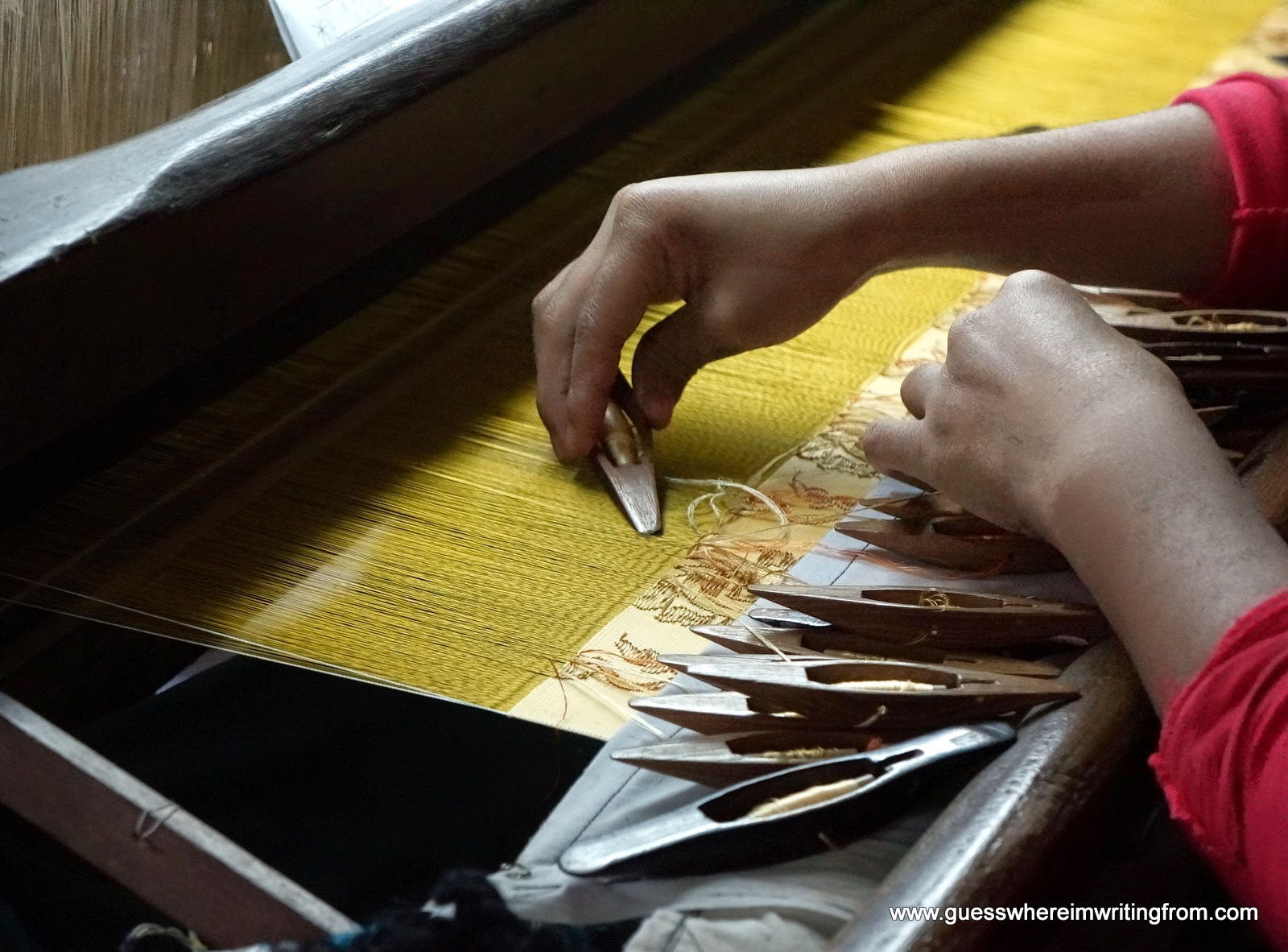 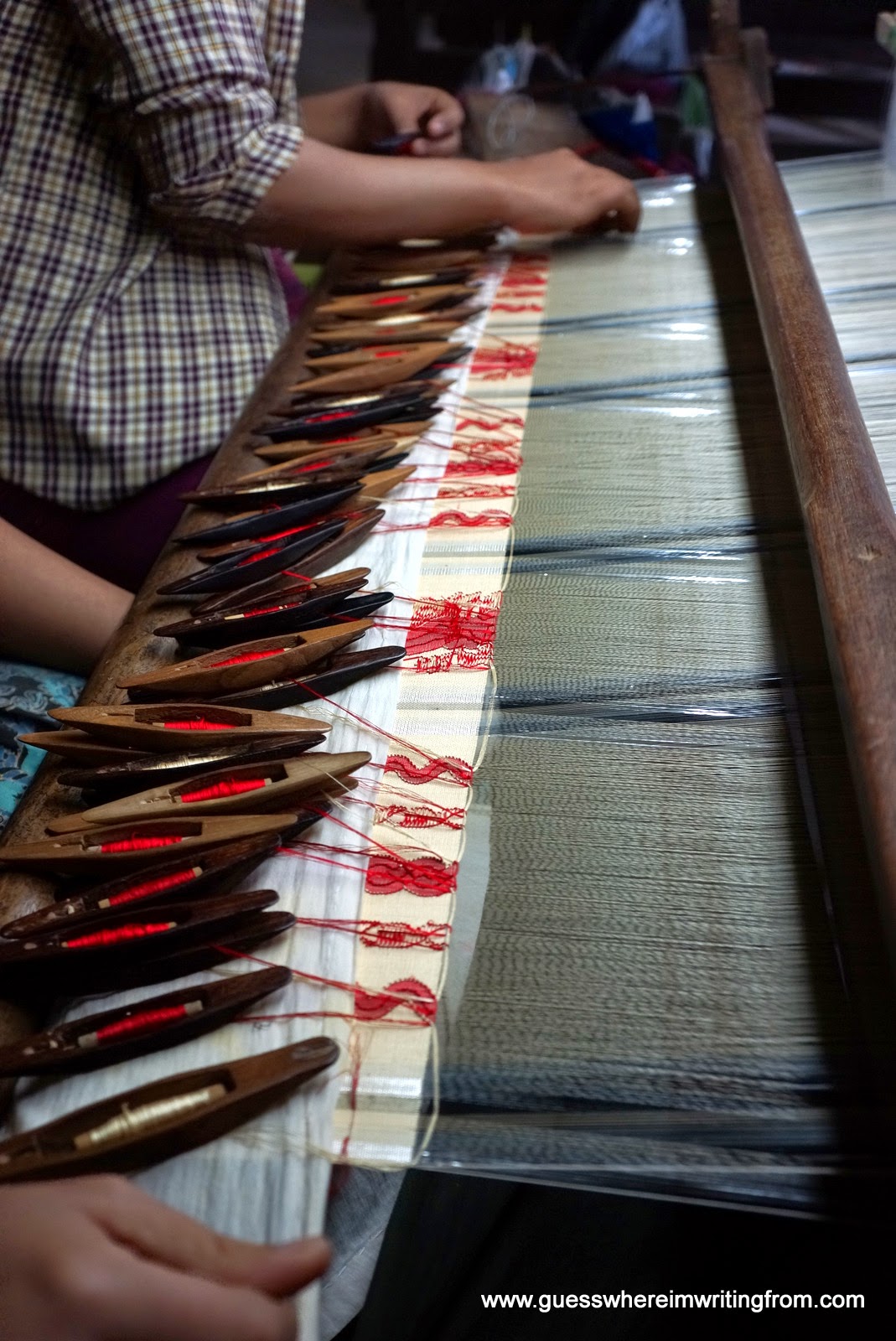 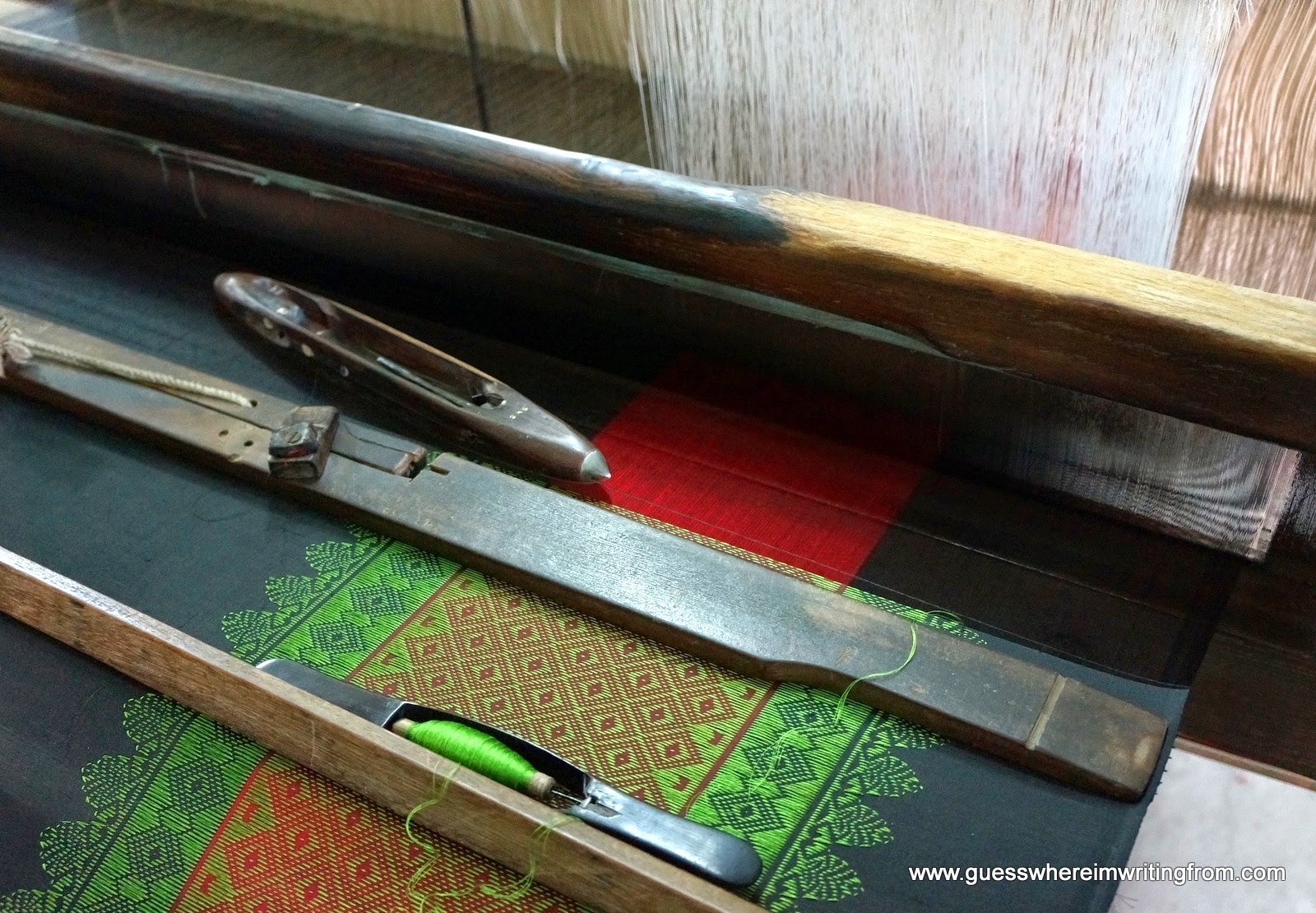 Myanmar is a predominantly Buddhist country and is the most religious in terms of the proportion of monks to its population. Burmese parents are obligated to send their sons to a monastery once they are seven years old or older to be admitted as novice monks. This rite of passage is called the shinbyu.

One of the biggest teaching monasteries in Amarapura is the Mahagandayon monastery where over two thousand monks live and study. It has become a major tourist attraction with visitors jostling each other trying to take pictures of the monks lining up along the street with their alms bowls on their way to lunch. Watching the red-robed, barefooted monks silently walk with dignity along the narrow street was riveting which was in stark contrast to the unruly and noisy tourists. 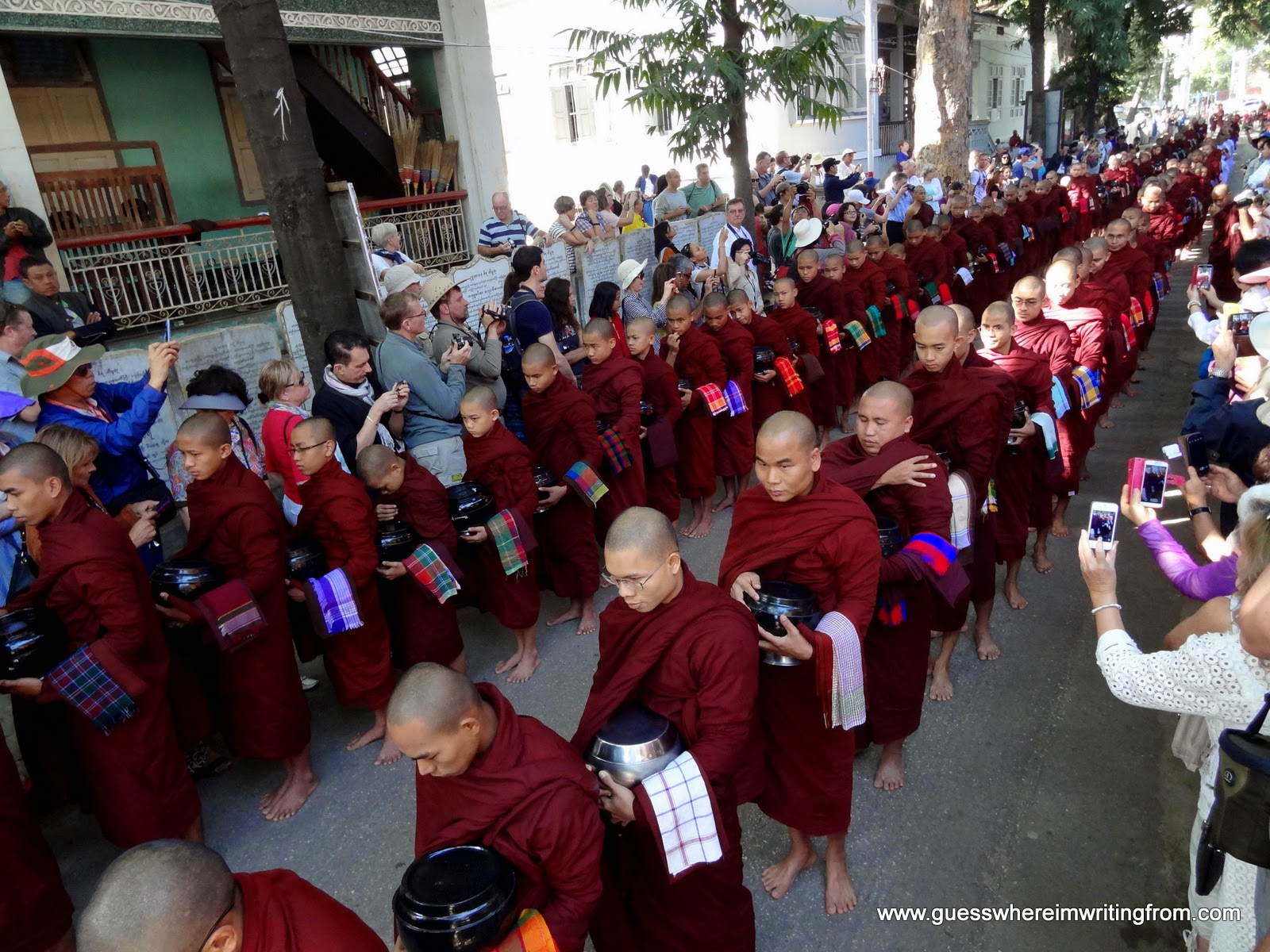 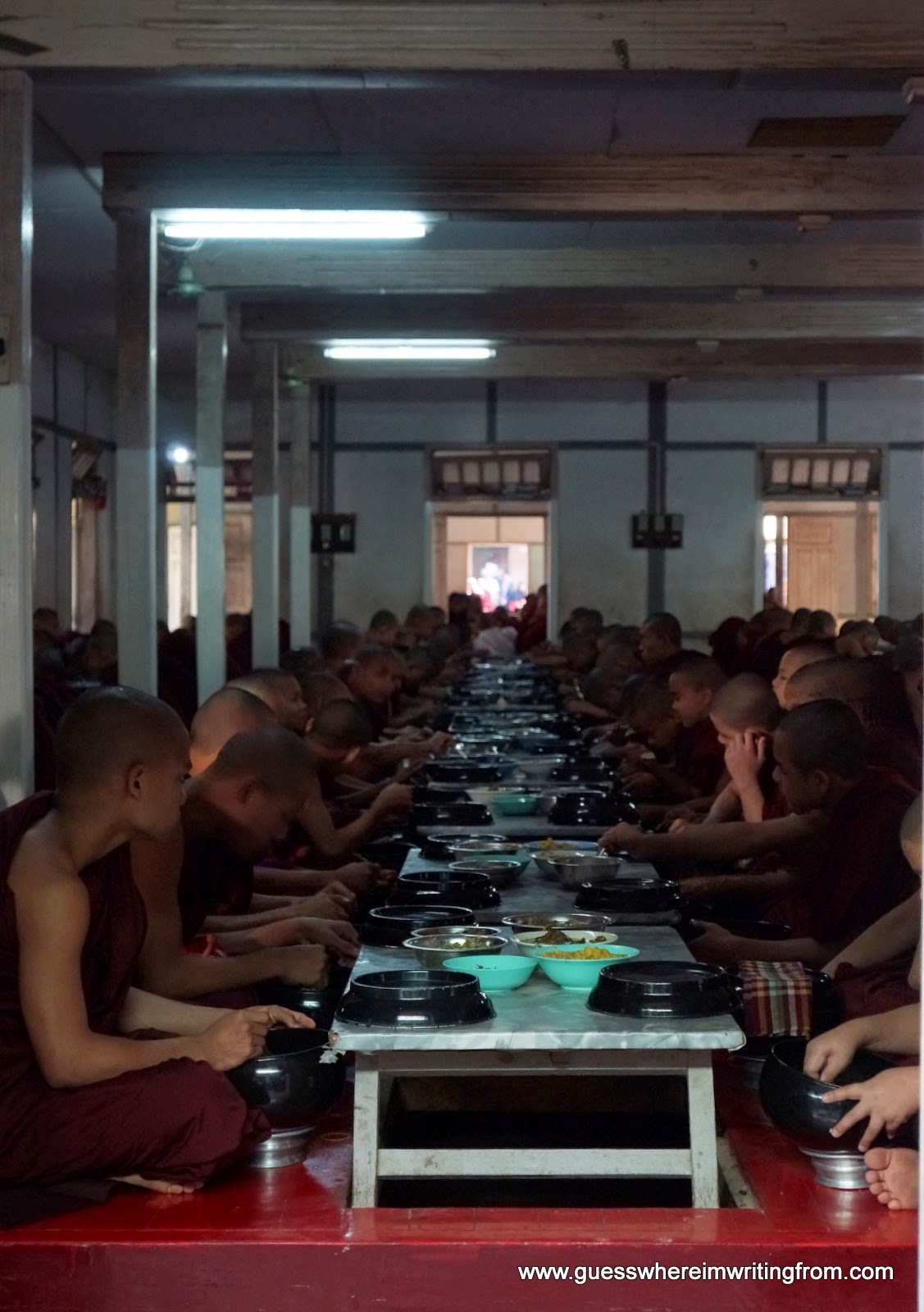 The U Bein bridge in Amarapura is the oldest and longest teak wood footbridge in the world. It is 1.2km long and spans the Taungthaman lake. The bridge was made from salvaged teak from dismantled temples and was named after the local mayor who commissioned its construction. 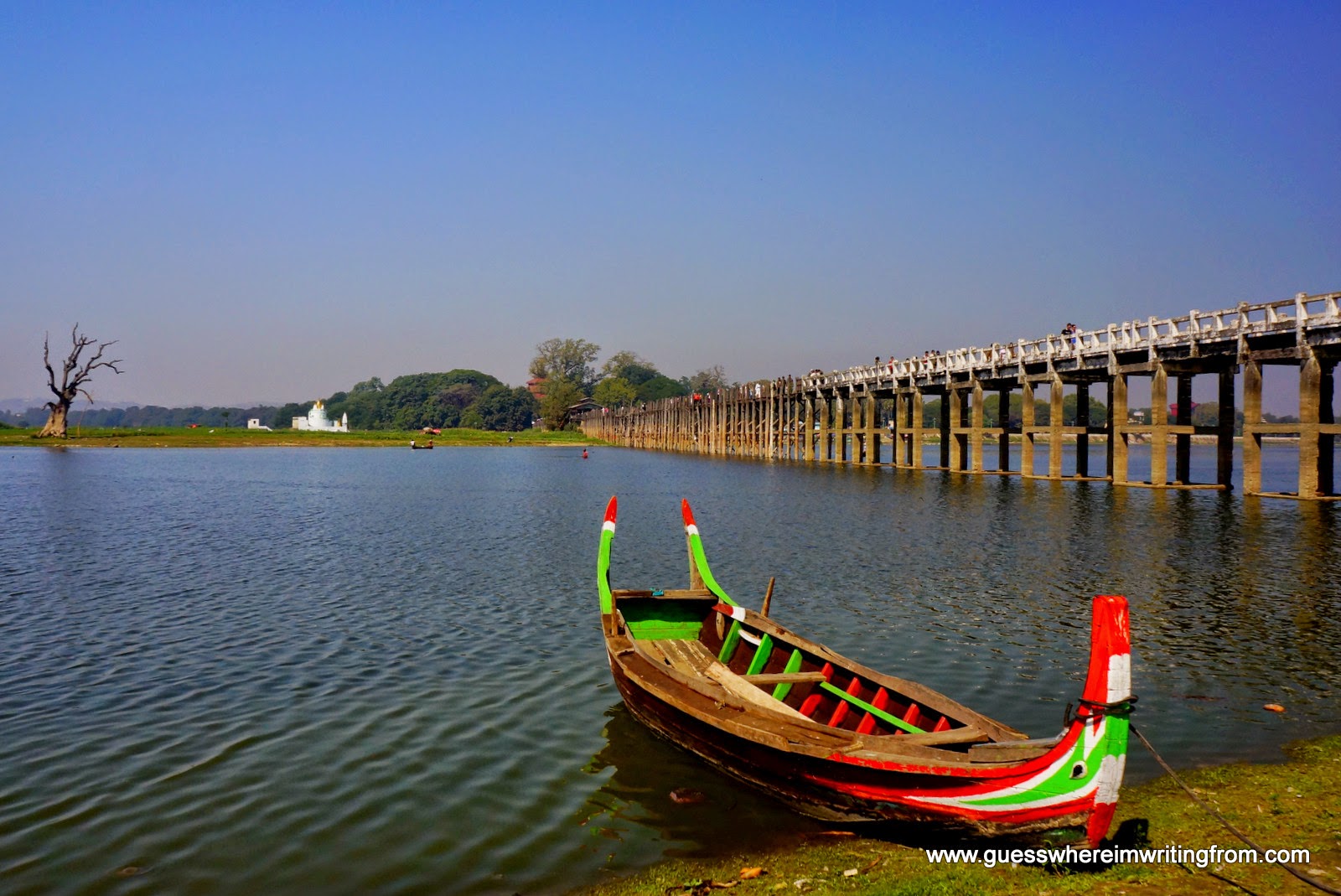 From Amarapura, it was a 25-minute drive and a quick boat ride across the Myitnge river to get into Inwa. Inwa or Ava was the capital of Myanmar from the 14th to the 19th centuries. 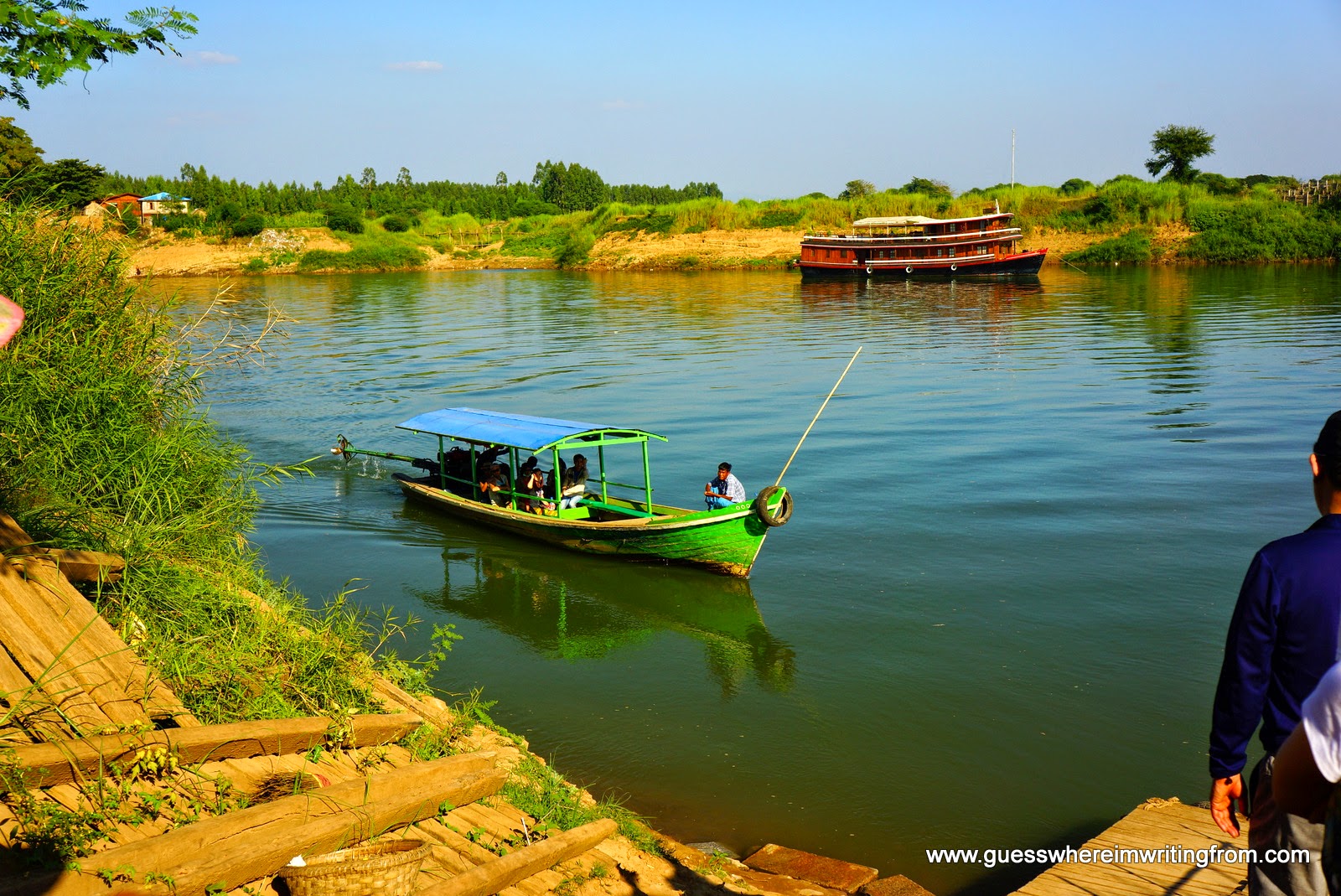 Getting off the small boat onto the makeshift pier on the other side of the bank, we were greeted by colorful horse-drawn carts along a stretch of muddy dirt road. Uh-uh, we would be taking the horsies to see the sights. Not exactly the most comfortable ride but it was the best way to get around. 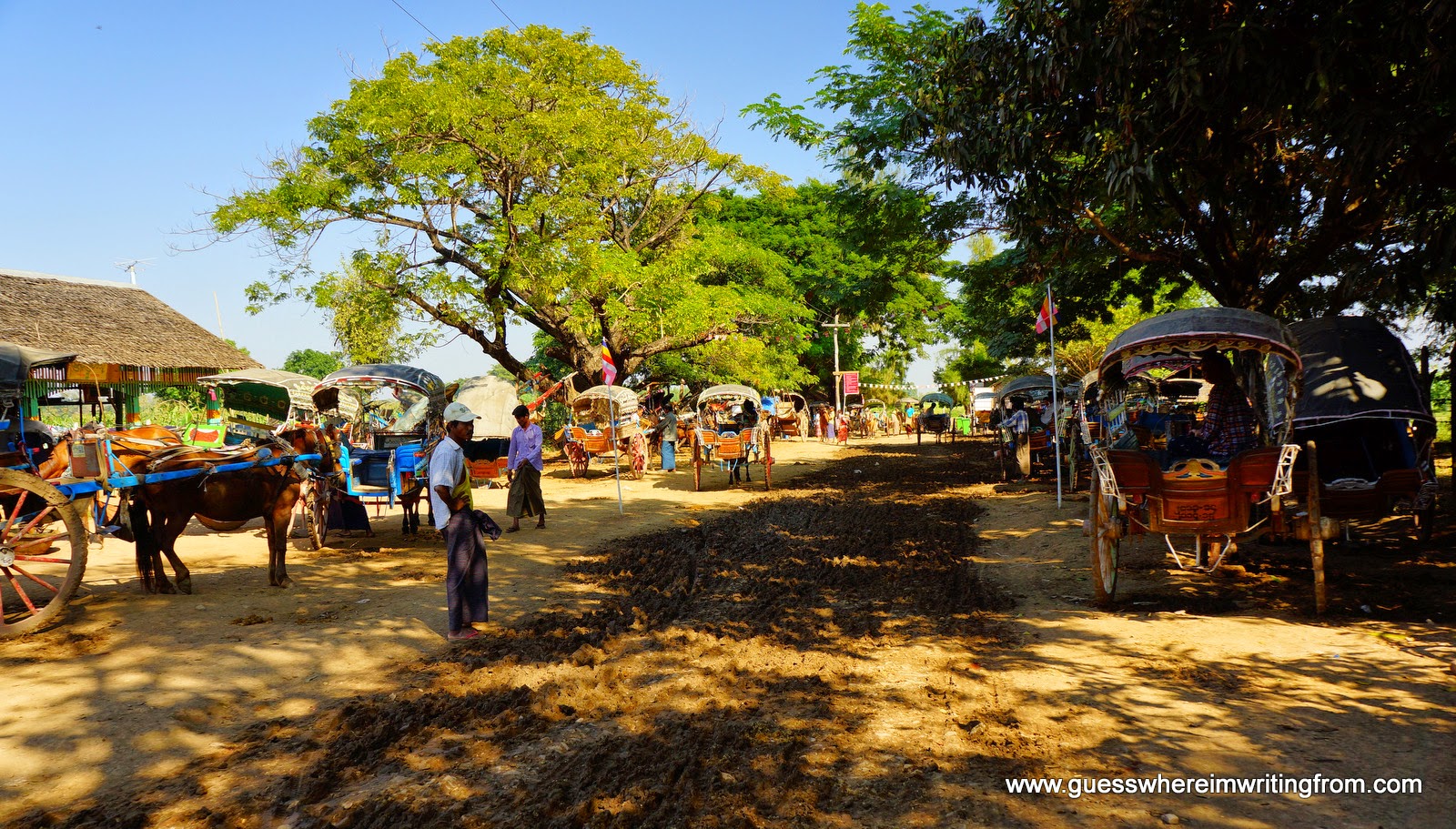 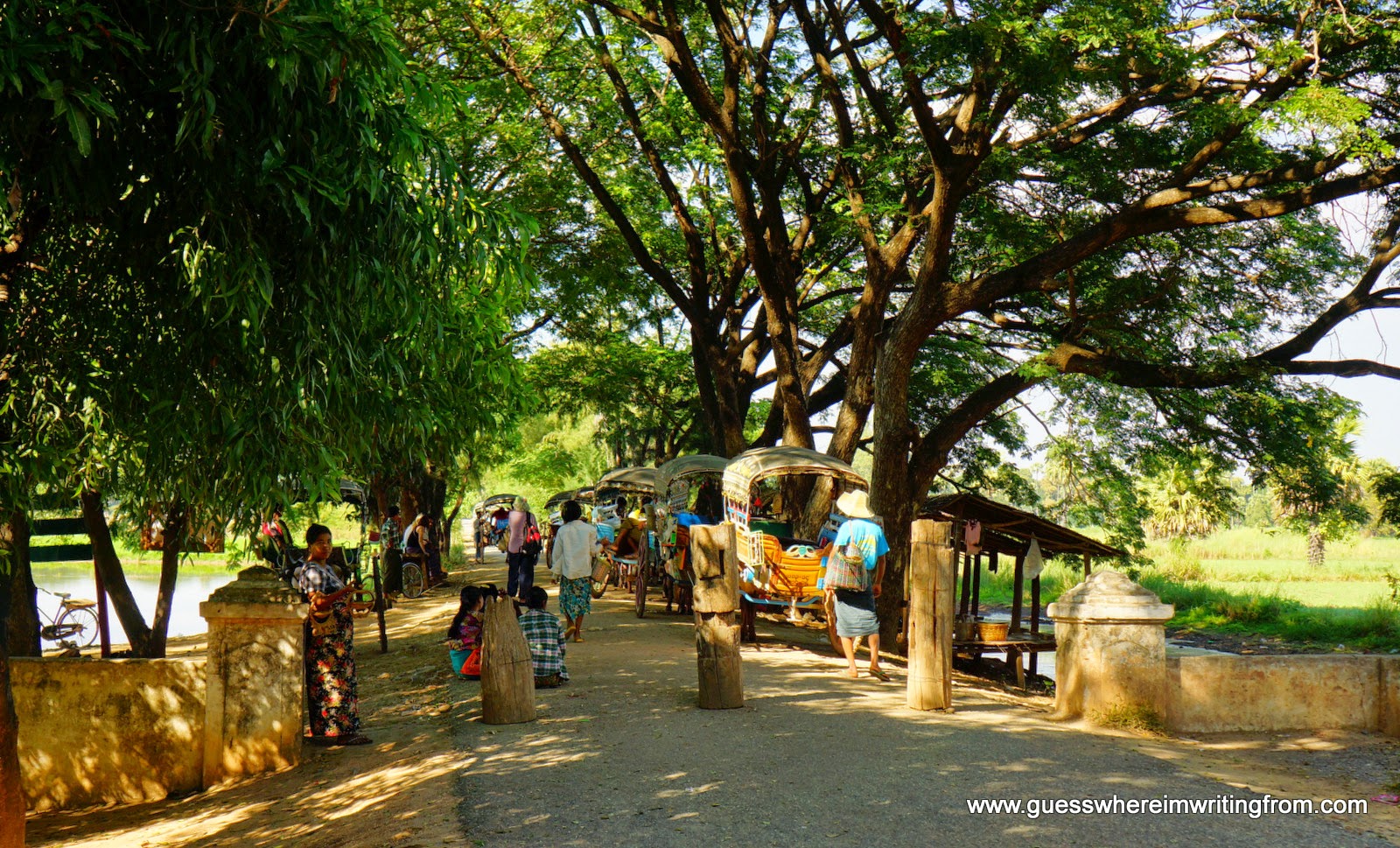 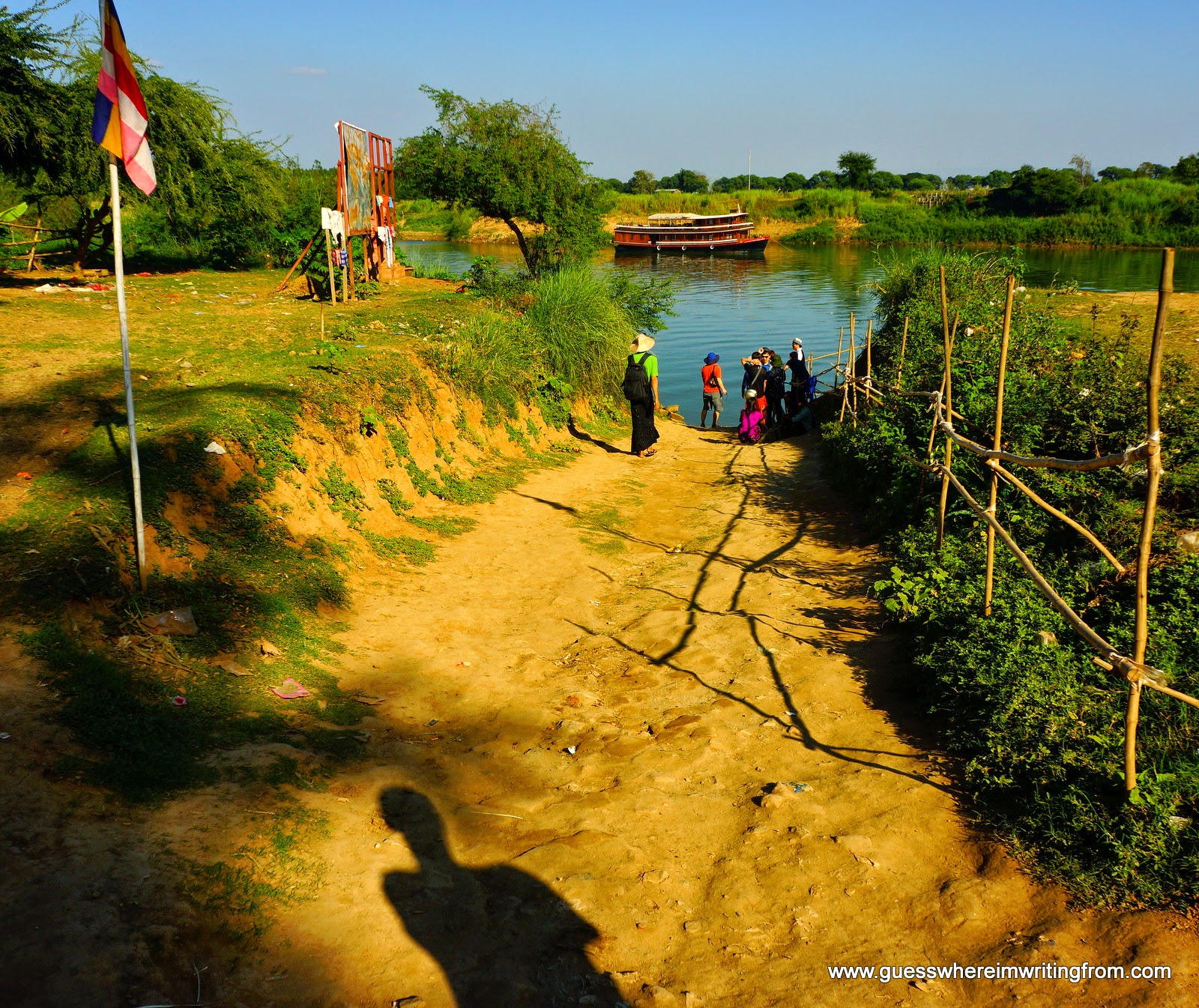